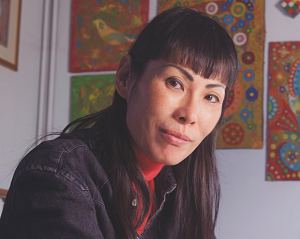 Tomoko was born in 1961 in the suburbs of the port city of Fukuoka, 1100 kilometres south-west ofTokyo, Japan, to middle-class Buddhist parents.

Her father, a war veteran, worked in the recovering local shipbuilding industry, while her mother stayed at home to look after the children. Tomoko, unwilling to accept what tradition still expected of young Japanese people, left her family when she came of age without the intention of returning.

In 1979, at a time when the military recruited women, she was one of 55 girls who joined the air force; she hoped perhaps to escape in a manner more exciting even than the one the sea had made her dream of, and to break from convention once and for all and to be the master of her own destiny.

Her ambition was to become a fighter pilot, but the rigid rules of the Japanese military did not permitit; she had to accept a lesser role, but her contact with this exciting new world was to leave a lasting impression: she wanted no more of the feeling of anger and resentment she felt at home and, from then on, every compromise she had to make merely represented an obstacle in her path towards independence and freedom.

– not towards the ethereal one of tradition but the real one made up of different people, countries andcultures, a universe in constant movement which she yearned to attain. And so it was that, for a second time, she left her home and, with it, Japan: she boarded a long-haul flight and was never to come back.

Was it perhaps the allure of a people that have wandered the world for centuries that, in 1997,attracted her to Israel? We do not know, and she cannot explain it; but it was there, during the two years studying art at Tel Hai College, where she discovered an innate ability to paint and to express herself through signs and colours. She has since given full rein to her creativity, immersing herself in her work to such an extent that sometimes she loses all track of time and does not stop until her hand tires and her head droops forward.

In 2002, Tomoko moved to Italy and she has no intention of leaving.

- 1979 Tomoko completed her studies and joined the Air Force.

- 1994 she studied psychology at a specialist institute in Fukuma.

- 2002 she met Roberto in Tel Aviv and returned with him to Milan where they married.

- 2009 her works featured in an exhibition in Milan.

- In 2009, Tomoko was mentioned as one of the 100 main female artists in the modern history of

Milan, in the 2nd volume of the publication “Le Protagoniste – le donne che fanno l’Italia” (The

Republic, the Chamber of Deputies, the Equal Rights Minister and the City of Milan.

- 2012 her works were displayed in a personal and a collective exhibition in Latina.

- 2013 her works were displayed in a collective exhibition in Latina.

I have been amazed and enchanted by the way in which the several shapes and the images have started to flow outside Tomoko’s paintings the first time I had the possibility to admire them, then I have watched closely and I have found the hidden life inside apparently random lines and unusual scribbles.

Just like you dance tango with your partner on a dance floor in a model of complex moves…I grasped the shapes dance of the Artist who composes fables and multiform dreams with the pen on the painting.

Tomoko is the Japanese Artist who expresses herself with Indian ink, acrylic watercolour and mixed technique drawings.

But it is a technique that seems to be a Mandala and even better Zendala combination .. or a sort of Xilography that recalls the  Mokuhanga ,a type of drawing which was used to decorate books, announcements, playing cards and obviously pictorial prints through popular and religious images, characterized by strong  contour lines, abstract shapes, tangled drawings and no depth or volume interspersed with Ukiyo which are “ images of the fluctuating world” and  a tongue-in-cheek suggestion of transcendence, as an alternative to the world tied to worldliness of the earth.

They are concepts that make reference to the buddhist concept of the sensorial world illusoriness and of the transient nature of existence.

The subjects are gleaned from nature and from life, but also from her inner world.

She is passionate when she paints flowers and animals, but also to fix movements and evanescent sensations.

Nature becomes a combination of symbols, a thicket of hieroglyphics that Tomoko interprets and decipher, and she becomes the decoder of the universe secret language.

All drawings, all shapes ask to the spectator to use his own imagination, and an expert artist uses it as a great strong point, but Tomoko can choose to what extent guide the spectator in his imagination.

And she chooses to leave something unsaid, like the white spaces of  ‘Oltre il tempo’ or in  ‘La porta del sole’ and in the detail of the same works, where almost every centimetre  is densely drawn, and where you can watch for a lot of time and again, without managing to capture all the tiny signs of the pictures.

The corner that is left empty represents the little corner of her inner universe.

In her art the geometrical point becomes an invisible  entity … it is the result of the first clash between the instrument and the solid surface and materially the point is equivalent to a zero, but when it belongs to her language and artistic writing it becomes silence… like the silence at the end of a sentence: the transient or definitive end of it and immediately after the connection between a statement to another one… and Tomoko does it through a line, a full or lined circle, a dense sky of signs, a field geometrically adorned with flowers like in ‘Silenzio’  and multi-coloured birds which are almost always the symbol of a rebirth or through optical illusions of movement of concentric waves like a stone thrown in water  in ‘Quasar’ , the big and magic woven sun of ‘Talmud’ at the end of motorway studded with dreams, or a patchwork of coloured spots of a  ‘Passeggiata nello Spazio’ and in ‘Creazione e Luce ‘ where order and geometry  become predominant again and where the exquisite networks of lines are necessary to make the shadows and precise, meticulous curls of beard clearly refer to the mindboggling.

Durer affirms that " Nature holds the beautiful for the artist who has the insight to extract it". And Tomoko does it and can do it just fine through an excellent technique and an exciting  composition of pictures, while we imagine her for hours and hours on her painting to make through endless symbols signs points  lines like a Penelope devoted to her loom and enchanted from a time that has not time.

-WE have a dream -Castello di Lispida -Giugno 2015