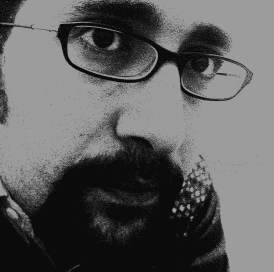 Born in 1976 in the southern Lebanese region of Marjeyoun,Ali Atieh showed a vivid interest and outstanding skills in drawing and painting since his early childhood. In 2004,although already working as a skillful interior designer, heobtained a degree in fine arts from the Lebanese Universityin Beirut. Between 2005 and 2008, he traveled to EquatorialGuinea and Abu Dhabi, where he established himself as asuccessful project manager, interior designer and muralist, a
career that continued to thrive after his return to Lebanon in
2008.

Ali currently lives and works in his hometown and for the past few years,he has been focusing on his art, through constant work on refining his technique and on exploring various themes.

After taking part in a few local exhibitions,

Ali participated in
the International Innsbruck Art Fair in January 2018 in Austria, where his work was equally acclaimed by critics andviewers.
Working mostly in oils, acrylics and mixed media, Ali focuses on the influence of technology on the human race, in a fusion between abstract and figurative.
His work is a combination of lively contrasts, a fascinating mixof observations, travels and introspection, where the artist explores the human physicality and inner life, through colors and intense gestures that fill the pictorial space.

Ali’s aspirations as an artist are for his paintings to be able to express themselves and find a way to connect with the
viewer where words fail.

Ali Atieh is an artist and a designer who strongly believes in what art, design and architecture can do, and how these sides can improve our lives in their ability of going beyond themselves.

The main means of expression in his work are painting, drawing and mixedtechniques. In his abstract paintings he tries to display  motions, feelings and moods.

He also tries to express transience of life as a necessary recondition to create something new.

His work belongs to modern figurative painting.
His paintings show a motif which goes beyond black and white, with warm and earthy colours – which are mixed up to shape different layers – which are smoothed on raw motifs and are often archaic stressing space, in this way creating its own areas and bringing image to further levels which emphasize the spectator’s reception and create attraction by its consciousness.

Meaning of visual arts with promises of feelings and contents is respected by using the depersonalised figure’s portait.
He is interested in the human figure, in its corporeality and to its emotional world.

He often locates its characters into the space’s background on one hand and counterposes the individual’s weakness on the other hand.
The artist creates a tangible and palpable world with intensity of his pictorial gesture.

He unexpectedly introduces rubbings by spatula and meaningful clear shots, by creating the impression that what we are looking at is a reflection of the dematerialized reality.
Ali’s painting represents the emphasis of moment and emotions accompanying creation of his work.

In his portraits surrealistic and/or figurative elements take form and style bychance, causing unlimited chances of perception.
His works of art are a combination of vivid contrasts, a myriad of interlaced levels and lively classes of spontaneity which are ready to be freely exploredand discovered.
Works, colours, forms and lines work together or each other to create a time of tale.

The artist seems working around a predefined shape, but he sometimes improvises colours and forms which take body almost independently on canvas.

Most of the time, he completes his works by reinforcing their awesomeness or, on the contrary, by introducing elements which stake any possible unequivocal interpretation.
His colours waver, as if they were weightless in the pictorial space.
The present time, actually the shortest, is secured on canvas and time stands still indeed.
Time whirling around us at a faster and faster rhythm, stops in the artist’s atelier , it stops to give a moment of life to portrait and to show the result.

Abstraction as realm of imagination, has always been the artist’s favored creative means, in a starting stage of geometrical compositions full of emotional intensity which remind logic of the architectural structures.

They represent a fusion of experience, observations, trips and self-examination :they are levels of life.
As the latter are constantly evolving, his job evolves too in order to be more consistent as time passes.

There is something so intense which can not be caught elsewhere. I think that his painting is more charming when transmitting you  sensation which is going to break; it seems more lively.

EXPOSITION IN THE GALLERY QUEENARTSTUDIO MARCH 2018