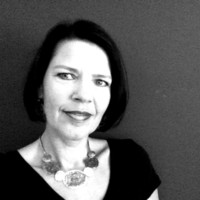 Anneke van der Zwaag was born in the Netherlands in 1969 and moved to Switzerland in 1992, where

she now resides in the canton of Ticino. Already at a young age she loved to draw, paint and decorate.

Since 2009 she started to dedicate more time and space to expressing her creativity.

She is a self-taught artist who finds great satisfaction and harmony in painting, and is grateful for the

enrichment it brings to her life. Her art works are the result of the combined use of skill, emotion and

fantasy to create aesthetic objects to share with others. Painting on both canvas and wood, using mixed

techniques and mainly acrylic paints, she let’s her current state of mind and inspiration define the choice

of colours, material and technique for her next artwork.

In 2012 she started participating in artistic events and exhibiting her art works. In 2013 she became a

2013, May 19 to June 29 Collective exhibition at restaurant I Grappoli, Sessa, Switzerland