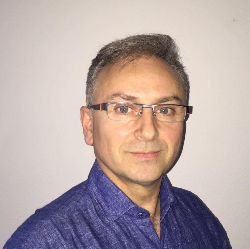 The journey is the reward – In this sense, my paintings are born out of great passion.

My artwork emerges from many different ways of expression.

the very moment of artistic creation. While examining my paintings I feel as if more and

self and many pantings are created out of this emotion.

Characteristic for my artworks is the Harmony of Shape, Color and Graphyc-
Linear elements.

If you find my pictures attractive or if you feel touched and inspired by them, then you are

Artworks in public and private collections.

The vibrant and colorful world of the paintbrush-wielding artists, prosaically known as painters, draws the distinction between two opposing species: those who work from a given idea and those who work from spontaneous intuition. Where the former seeks to translate a clearly formulated concept into artistic reality through the use of sketches and studies, the latter trusts to the oft-times convulsive emotional surges that guides their hand and leads

them to pick up paintbrush and canvas. In the process of this eruptive-emotional outburst the motif slowly takes shape as the pictorial figure appears.

The Macedonian artist Makeshi Goran, born in Skopje in 1964, undoubtedly belongs to this latter grouping. During his initial artistic development, he found an invaluable teacher, assistant, and adviser in his father Jordan, an artist in his own right. This relationship continued even once Makeski came to believe he had found his own artistic voice.

But at what point can an artist really claim to have found his or her own voice, even after they have found what is generically called their own style?

Numerous artist residencies have shaped Makeski’s artistic career. These have led him to locations all along the Mediterranean and European coastline. His personal affinity for the sea and its shoreline quickly becomes evident to any observer of his work attuned to this artistic sensitivity become color. He has successfully completed various residencies, study programs, and workshops, for instance with Christine Zech in Münchenstein (Switzerland) andwith Alvaro Castagnet on the Costa Brava. With the exception of the Alpine realm that he has made his adoptedhome, he has favored working locations with some kind of maritime connection.

While it is certainly correct to classify Makeski as an abstract painter, this description falls short of his artisticpractice. Where his sensitivity dictates, his artwork will follow a path that can indeed culminate in representationaland naturalistic motifs. Such is the case with the watercolor “Sunset” (2014) or the acrylic painting “Surf ”(2014).

Currently his work has followed a path that has led him to the Berlin Gallery Dikmayer Berlin Mitte afterexhibitions on the Costa Brava (Roses), at the Solothurn Art Museum (Power of Earth), and at the Swiss Art Day in Münchenstein.

As for the tools of his trade, Makeski clearly knows the materials he prefers for his abstract work. These include paper of different type and quality and above all watercolor. However, this does not mean he will disregard the classical stretched canvas. But his evident love of paper and watercolor clearly speaks to his background as a trained

draftsman and from which he gains a direct and immediate relationship to these materials. This is especially true of his preference for the surface of refined paper that at times even appears to have vintage qualities.

The discreet and sensitive custom frames of the Gallery Dikmayer Berlin Mitte further heighten the expressive force and effect of his paintings.

To turn now to the cardinal question that can no longer be contained: how and in what way can the motifs of Makeski speak to me, the observer? Which of my strings do they pluck, where do they strike a chord? Whenever I come before his figures as they writhe and twist and mingle, even repel and rebuff one another, I find myself entering, strangely touched and moved, a magical realm of mythical creatures and cursed fables, their faces changing continuously.

At times I am reminded of the long forgotten encounters with the wood spirits of my childhood days: the ivy-crowned elves and kindhearted fairies, the cunning gnomes, wily trolls, and wicked dwarves. Other times I find myself recalling trysts with gold-locked mermaids that glide across the sea on clouds of foam or rememberingencounters with nymphs and water-spirits such as the beautiful Thetis or the mysterious Cretan Princess Ariadne, thedaughter of King Minos. However, not all these encounters unfold quite so harmlessly, for the sea is full oftreacherous even vengeful and bloodthirsty sirens, Medusas, or gorgons, as seem to appear in Makeski’s latest work“Triptych.”

Woe betides the viewer who comes too close to these grotesque creatures of the ocean depths! Or who approaches moody, cantankerous Kynops, that unloved brother of the mighty sea god and whom he cast into the ocean in anger near Patmos, there to churn the waves and toss the waters, throwing up terrifying whirlpools that ever since threaten

to devour all and sundry.

These indeed are the poetically internalized pictures and motifs that a Makeski can cast before the attendant observers with his textured and trembling swathes of color to elicit a sense of warmth and happiness or even a frosty feeling of frightful horror. There is nothing left but: look and marvel at this miraculous world that Makeski conjures.

It is worth it, not least for those young at heart, for they do not age.

Most recently the artist showed a total of eight works of different shapes and sizes at the 17th International Art Fair Berlin. These works, mentioned in the text above, were on view at the exhibition center Fischerinsel-Passagen of theGallery Dikmayer in the heart of the German capital.

GORAN MAKESKI: THE ART OF TRANSLUCENCY

Goran Makeski has an international reputation

one offering something unique – each one representing a challenge for the artist – each one satisfying and stimulating, at the same time, the spectator.

Working by the watercolor technique, this artist of extraordinary talent has progressed…

something special comes out from his mixture.

His artistic life represents a journey, one step performed after the other which immediately

brings to the next one.

You will find some works celebrating our natural world and transcending it, and the endless

magic that creates every day by changing light.

Besides that, you will see an artist willing to represent daily aspects of life, attracted by spaces we build for ourselves and by how we navigate in our world through these spaces.

He is interested in ordinary aspects of daily life, his purpose is to leave a heritage of images

that, once they are put together,  send back to partial views of certain things which are

important for life of every person.

His final objective is to make image become a so unique thing with its means, so as it seems to flow on page – lines express the absolute flow and energy which are intrinsic to the picture, its colors have a translucency, a brightness and an intricacy to transmit their own vibrations, and his pictures are strong enough to represent his ideas with clarity and attention. Translucid quality of his watercolors is excellent.

Above all, he wishes to communicate outwards its core with all its incongruous particulars or undefined details which are indeed in a second place as regards sensations expressed by

power of his images’ tones.

When he paints, his objective is not that of producing recognizable shapes. State of mind,

atmosphere, light and colour are much more important for him.

His actual style, which has changed over years, aims to eliminate details and to underline

effects of the sky’s cadence or of the light on ground or on water.

Therefore, he can be simply inspired by a simple colored band on a shadow or a cloud’s

border, or by a lively color on the horizon, which calls to mind shapes and remembers other

places, other times and other tales on experienced or described stories, just grabbing on to

Flexibility and touch of his brilliant watercolor are exciting and it is as if he wanted to defy the spectator in creating some surprises and unexpected sensations.

and methodical theories of technique; but it certainly succeeds in a funnier way. In this way,

he offers the opportunity to play with shapes and to create unique effects, everything is made without distracting the spectator from images created by mixtures of color which uncannily materialize from nothing and which contain hidden interiors and inexplicable levels.

His works are made, in a simple manner, direct and natural thanks to his gestural ways

revealing his deep interest in painting.

Thus, we can see behind what he shows us and let us see interpreting our experiences and our perceptions, the creation of a unique canvas, just for us.