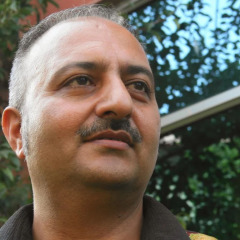 recievedGOLD medals in all the Youth festivals in Painting & Collage making

All Round Best Student in display Your Talent, University Of Jammu. 1992.

Citation awarded by University of Jammu for Overall contribution to Culture & Arts.1993.

Recieved various prizes and awards at University and College level.

- Group Show of paintings , “ The Heritage” organised by Shrijan Smooh on Cultural heritage. 2013and Jammu Heritage Society in collaboration with Jammu Tourism.

Solo Exhibition on AIDS awareness at University of Jammu, 1993.

The six days painting exhibition, titled; “ the Journey and Beyond”, today on October 31, 2010 concluded at Kalakendra Jammu.The first solo paintings exhibition of self taught artist, Mr.M.A.Alnasir. , who hails from the state of Jammu and Kashmir, and is presently working as Munsiff / Judicial Magistrate with the state Judiciary. A collection of 19 paintings covering various aspects of the Human life, was on display. The Journey is two fold one beginning in the form of the theme subtly underlying the collection which depicts the journey of man from the very advent of creation, till one joins the creator in unison, and second is the artist’s personal journey in the field of art, wherein his paintings, ranging from those painted way back in 1992 till 2010 almost 18 years of travel through the world of arts. The exhibition is a riot of colours gradually melting into spiritualism and higher philosophies of life especially where man is seen face to face with the forces of nature. The diversity of subjects treated by the artist reflects his various moods and the subconscious flow of thoughts which is unrestricted and passionate. The hardness of the subjects is very aptly treated with a playfulness of vibrant colours in their interplay, harmonized in a rhythm, such as symphony of aesthetics.

The exhibition was very well received by the audience in Jammu alike be it the officials, bureaucrats or the people from the media or artist circle.

The artist well acclaimed in his student days was overjoyed by the response with which he was received by the spectators. Earlier the exhibition was inaugurated by none other than Artist’s own mother, Mrs. Suraiya Jabeen Salaria, to whom the artist has dedicated this exhibition, as a tribute to the greatness of motherhood.  [Daily Excellsior.] 1st Nov.2010.

The group was founded by three artists working as hobbyist in the field of painting and photography, and is an open forum for pursuit of creative ideas in any form. The group had to its credit three group shows with almost over twenty five artists so far participating in various group shows, and perhaps none of them working as a full time artist, but pursuing art as hobby.

Its a forum for discussing and expressing ideas in any form and the freedom of expression being the core value, the Shrijan Smooh is on its way to the provide platform to the un recognised talent who are shy of the vastness and aura of the ART galleries. In the words of Slavador Dali, ‘if you are looking for perfection, it never comes’. But at least one can have the freedom to express his latent creative side, and who knows when WE discover ourselves.

Man has always tried to pursue his muse, and as part of the larger scheme of the one and only Creator of his universe, that, instinct of creativity permeates every particle and so it finds its way into the species called man... the pursuit of unknown has always fascinated human beings leading them to a discovery of self.

Art is one such form which connects not only people with themselves, but with the ultimate. It’s equally a form of meditation which not only gives pleasure while the process of creation is on but the constant feelings captured in a format, be it a picture captured in the fraction of a second, or a canvas or a couplet...

Jammu, Feb 21: Usha Vohra, First Lady today inaugurated Silk Mark Expo-2015, an initiative of the Central Silk Board of Union Ministry of Textiles, at Kala Kendra here.
The first lady also inaugurated a photography exhibition “Alone Together”. She showed keen interest in the pictures at display, particularly those exhibited under the landscape, fusion and Ladakh captions.
The exhibited photographs have been taken by Mahmud Anwar Alnasir, She appreciated the work of the artists.

Jammu, Feb 21: Usha Vohra, First Lady today inaugurated Silk Mark Expo-2015, an initiative of the Central Silk Board of Union Ministry of Textiles, at Kala Kendra here.
The first lady also inaugurated a photography exhibition “Alone Together”. She showed keen interest in the pictures at display, particularly those exhibited under the landscape, fusion and Ladakh captions.
The exhibited photographs have been taken by Mahmud Anwar Alnasir, Chandan Sunder and Vijay Gupta.
She appreciated the work of the artists.

The week long festivity and celebrations on the eve of Baisakhi, festival with the special theme of Heritage was organised by Jammu & Kashmir Tourism in collaboaration with Mubarak mandi Heritage Society from 13th April to 18th April.2013 at the heritage Ministry of Defence building of the erstwhile Maharaja of the State. The Exhibition was inagurated by Sh.Tara Chand Dy,CM of J&K State.

The exhibition showcased works of M.A.alnasir. The various themes covering spiritual dimension as well as the essence of cultural ethos of the state were on display, and thronged by thousands of onlookers who were seen posing next to the exhibits with their cell phones clicking their pictures. Another set of art pieces which were appreciated in the exhibition were the two water colours of  Mr.M.A.Alnasir, titled, 'lost glory ' depicting Jharoka of Mandi Mubarak through a crumpling ruin depicting the dilapidated glorious past which was not preserved over the years, while the other art piece was titled,  'ruined tranquality ' which depicted an old women raising her hands to pray the presiding peer of the valley, while a samovar lay on the mound overlooking lake Dal,  the lost glory of Kashmir is personified in a beautiful damsel gazing skywards for return of eternal peace.

Genius, of course, has no  limits. It can’t be closed in the rigid confines imposed by the parcelling of knowledge or by the strict determination of study environments.The artistisstrictlybound to the Divine.At the human, too human procedure of the single fields of knowledge  identification, he tenaciously rebels, directing his penetrating gaze to everything that draws  his attention, that intrigues and  attracts him, without  any limits.

Driven by an uncontrollable impulse towards the achievement of knowledge, able to embrace the universal,  Alnasir, indeed, during his brilliant career took in consideration this fascinating  subject of study: art and also much more,  facing the topics handled with  a great power of observation and rare intelligence.

His are images that starting from the spirituality declare a strong  involvement in a series of situations that don’t leave anything to the imagination, but maintaining an exemplary formal resolution. This direct involvement  of the author at the conceptual and visual definition of the work  is a distinctive element  of the research on the themes of identity, of the body and of the religion.

The interesting thing to highlight from the start is that, under the really philosophical point of view and under multiple aspects, his philosophy almost seems to develop, with a divinatory manner, social themes and concepts.

Thanks to the possibility to serve as an instrument for the conceptual mediation with the world, also the use of the camera permits the involvement at the rapid and constant evolution of the surrounding reality to Alnasir. An involvement that wasn’t permitted by the traditional artistic techniques, like painting, because of their nature of symbolic translation of the reality

A combination of microstories showed in an intimate and  melancholic atmosphere and inside them the photographic images carry the sad weight of the absence, a source  of inspiration and meditation that has leaded  the Artist to a research that goes beyond  the simple vision.

For this reason his visual works are part of a new energy that tends to unite rather than divide, and to take the opportunity  to permit that every figure, image, detail and word related to the work becomes a cause of reflection  for whom watches.

Every painting is a creature, with a two dimensional body and a big aura,  with whom  the dialogue can be weaved.

Many passionate, spiritual researchers  admire them creatingsome real moments of careful consideration in which  increase  the sensitivity and reflect, relax, communicate with hidden parts of themselves.